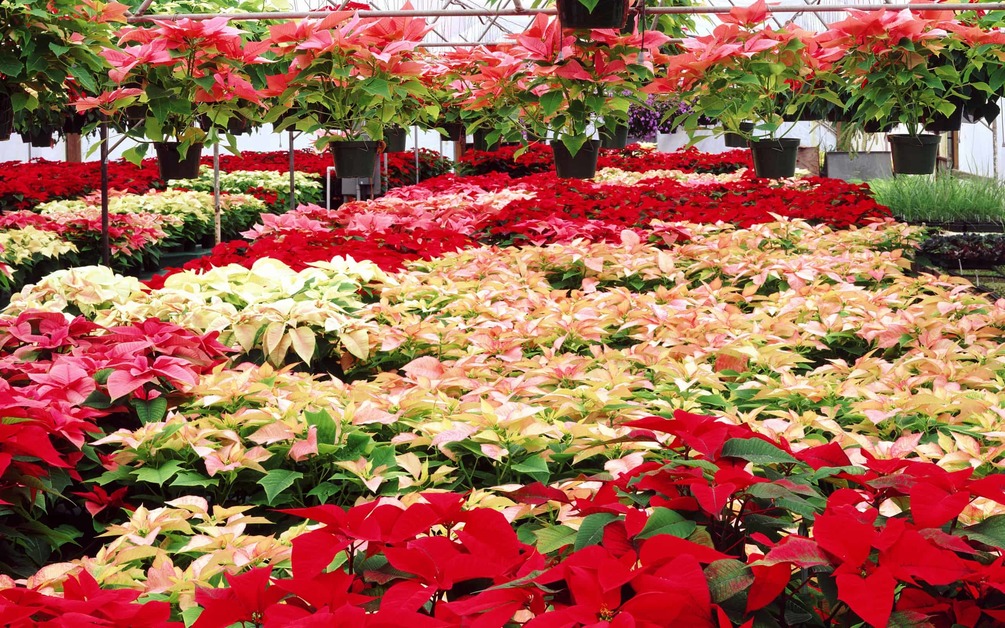 A QUICK HISTORY OF THE POINSETTIAS

Poinsettias are the most popular houseplant in the world. Every Christmas season, Americans snap up more than $200 million worth of the festive plants. They adorn mantels, tables, and hallways across the country. Poinsettias were originally brought to the United States by Joel R. Poinsett, the U.S. ambassador to Mexico. He liked the spiky red desert plant so much he shipped in the first load in 1820. Today, the plant bears his name and is so popular we even have a National Poinsettia Day (December 12).

The plant's association with Christmas began in 16th century Mexico, where legend tells of a young girl who was too poor to provide a gift for the celebration of Jesus' birthday. The tale goes that the child was inspired by an angel to gather weeds from the roadside and place them in front of the church altar. Crimson "blossoms" sprouted from the weeds and became beautiful poinsettias. From the 17th century, Franciscan friars in Mexico included the plants in their Christmas celebrations. The star-shaped leaf pattern is said to symbolize the Star of Bethlehem, and the red color represents the blood sacrifice through the crucifixion of Jesus. In Spain it is known as "Flor de Pascua", meaning "Easter flower". In both Chile and Peru, the plant became known as "Crown of the Andes". Albert Ecke emigrated from Germany to Los Angeles in 1900, opening a dairy and orchard in the Eagle Rock area. He became intrigued by the poinsettia plant and sold them from his street stands. His son, Paul Ecke, developed the grafting technique, but it was the third generation of Eckes, Paul Ecke, Jr., who was responsible for advancing the association between the plant and Christmas. Besides changing the market from mature plants shipped by rail to cuttings sent by air, he sent free plants to television stations for them to display on air from Thanksgiving to Christmas. He also appeared on television programs like The Tonight Show and Bob Hope's Christmas specials to promote the plants. Until the 1990s, the Ecke family, who had moved their operation to Encinitas, California in 1923, had a virtual monopoly on poinsettias owing to a technological secret that made their plants much more attractive. The Ecke family's key to producing more desirable poinsettias was to create a fuller, more compact plant, by grafting two varieties of poinsettia together. A poinsettia left to grow on its own will naturally take an open, somewhat weedy look. The Eckes' technique made it possible to get every seedling to branch, resulting in a bushier plant.

In the 1990s, a university researcher discovered the method previously known only to the Eckes and published it, allowing competitors to flourish, particularly those using low-cost labor in Latin America. The Ecke family's business, now led by Paul Ecke III, decided to stop producing plants in the U.S., but as of 2008, they still serve about 70% of the domestic market and 50% of the worldwide market.

For years poinsettias had the bad reputation of being poisonous. While they are not meant to be eaten by humans, pets or livestock, ingesting poinsettias would probably cause some stomach upset, as would eating most any houseplant. However poinsettias have undergone extensive testing and there is no evidence that they are toxic or unsafe to have in the house. They are also safe to put into the compost.

A more likely problem to watch out for is contact dermatitis. Euphorbia exude a milky sap when broken. (Think of milkweed.) Some people are sensitive to this sap, which can cause an itchy rash. Be especially careful not to rub your eyes after touching the plants.