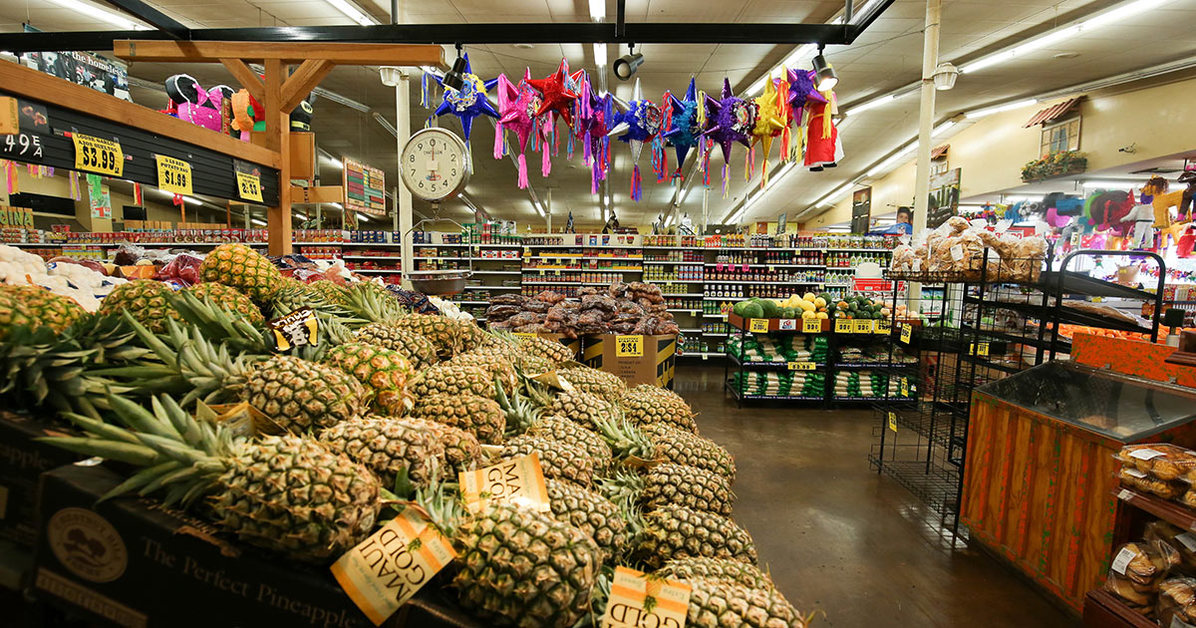 Once Only a Haven for Hispanic Food, Ranch Succeeds in New Markets

There's never been a question about the foundation of the Ranch Market. Once only a haven for Hispanic food, Ranch succeeds in new markets.

The store's motto is "Autenticamente fresco con amibilidad" -- which is Spanish for "authentically fresh with friendliness." Inside the store, there is a panaderia (Spanish for bakery), a café with a vast assortment of Mexican dishes, and of course, there are freshly made tortillas and chips, which are often still carried out steaming inside their bags because of their warm freshness.

But there is a noticeable change to the market -- one that is only going to continue, according to David Ireland, whose family has owned the store since 1996.
"We will always have our Hispanic base," says Ireland, who manages the store. "But look around here. We have a real international flavor now. Indian, Middle Eastern, European."

You can also get your traditional standards found at chain stores. Yes, they stock Oreos and Campbell's soup. But over the past three years, the inventory has expanded to include more international specialty items for Italian, Indian, Chinese, African and other kinds of recipes.

​"It never ends," Ireland says. "You bring in one thing and some will say, 'Can you get this?' and we will."

Sometimes it means first-time specialty orders might wait a week or two because he has to seek out a vendor that sometimes is the only one in Southern California who can fill them. But, Ireland says, once they get a new item, it becomes a staple because he knows his customers have come to expect it.

This means the variety and options are vast. For instance, the produce section is vibrant with choices. Who knew there were multiple kinds of eggplant or okra?

And, as Ireland explains, the produce section is only going to grow. The reason, he says, is pretty simple.

"Every culture uses produce," he says. "It may be the only food that unites us."

Look a little deeper and there are regional cheeses for international recipes. There is every grain imaginable.

And at any given time there are nine kinds of salsa ready to scoop, made in house from scratch.

"There are more, but that's all that fits in the case at once," Ireland says. He explains the chefs decide what to make based on what's fresh and most tempting in the produce department.

The bulk center allows shoppers to get as much or as little as they want of the nuts, flours, quinoa, rice, oats, sugar, trail mix and more from the bins or double stacked dispensers that surround a structure in the middle of the store. It began with a single dispenser but now fills much of an aisle because so many different types of items have been requested.

One of the most substantial sections is for meats. Inside the glass coolers are a wide variety of meats, some marinating, others untouched. Ireland says the store is particularly known for its marinated chicken asada.

"Produce and meat are where we can exploit our chain competition," he says.

Ireland describes a broad variety in his clientele. Many local people shop there for the bulk prices and to eat from the cafe in the back, which features as much as or more than most Mexican restaurants, including carnitas, flautas and enchiladas made in-house slow-cooked meat; and build-your-own burritos and tacos, plus a chips and salsa bar.

Thursdays are Sonoran Hot Dog Thursdays, and every day the tortilleria makes fresh corn and flour tortillas and chips before your eyes.

Others within and outside of Redlands are coming because they love to cook.

"It's the people watching the Food Network and saying, 'Where do I find that (ingredient)?'" Ireland says. "Once or twice a day you see someone coming through here with their chef's coat on, either going home or going to work."

On a recent day, Ireland held up a box of freekeh, a North African green wheat that people are wanting because it is a superfood.

"I like it because I get bored easily," Ireland says of his job. "And I love watching people have a different experience, which is what we try and provide here."