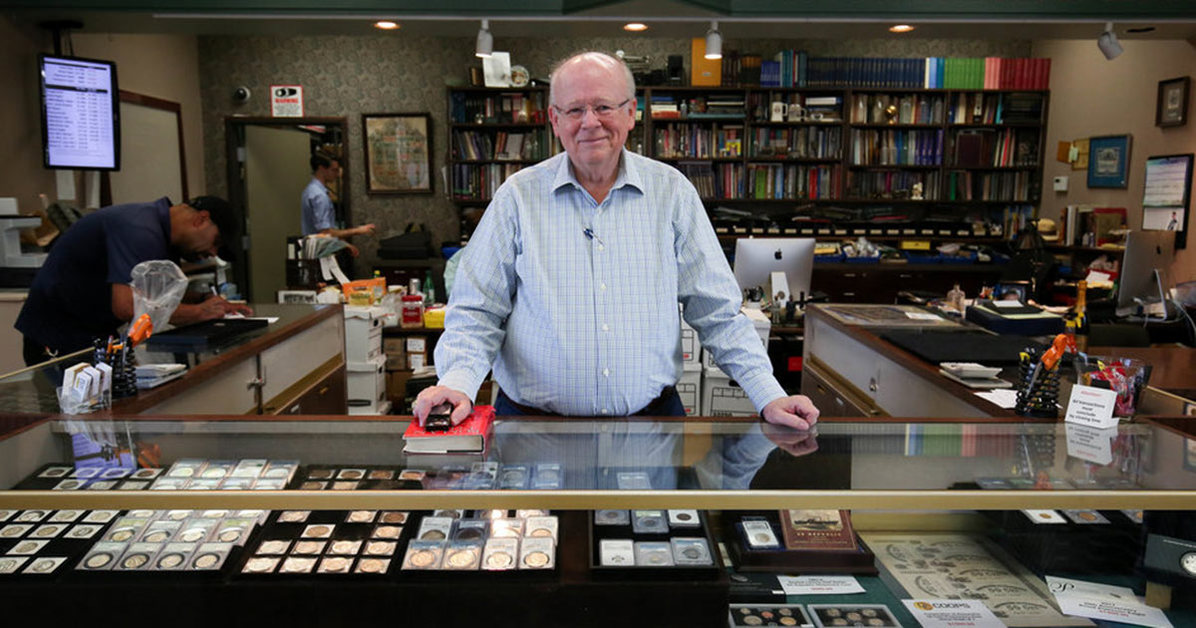 The mismatched collection of containers held old coins that a customer had brought in, hoping against hope that Randy Briggs would give some surprising news about discovering a rare and valuable coin.

“This is the sort of stuff that we get all the time,” said Lauren Briggs, who owns Coops Coins in Redlands with her husband Randy. “Most times, it isn’t worth much. But sometimes we find something unexpected. Either way, Randy will know what it’s worth.”

Any customer who does come into the store nestled in the downtown on Redlands Boulevard is met by a smorgasbord of history. There are the coins, some ancient, dating back before the birth of Jesus Christ. Paper money from across the globe sits on a desk and fills display cases. Stamps of all sizes and colors sit in paper envelopes, waiting for attentive eyes.

“We have handled a lot of interesting things,” Randy Briggs said understatedly.

But there is also an ornate life preserver ring from a U.S. Navy vessel. And then there’s a lobby card from the film “A Streetcar Named Desire.” Don’t forget about the Disney Dollars or a poster depicting Hitler as a monkey. And then there is the plate with President John F. Kennedy’s face. And old postcards from Redlands. And….

This list goes on and on. There are that many unusual discoveries to be made here.

But at the heart of all things are the coins.

Fred Coops first opened his establishment in 1935 selling stamps. In the 1960s, he hired Randy Briggs, who was one of his earliest hires and at the age of 16, certainly the youngest. Randy Briggs later became a co-owner of the business and eventually became the sole proprietor.

The store opened in Redlands in 1995 where it has become entrenched as a successful downtown business. And yet, new customers from Redlands walk in every day, Lauren Briggs said.

“People walk in and are amazed,” she said. “They had no idea that here in little ‘ole Redlands there are case after case of rare coins, stamps and paper money.”

The real fun comes when Randy Briggs starts inspecting the items that customers bring in.

“What a site it is to behold when my husband goes through their stuff and tells them immediately not only what he would pay for it, but the story behind it,” she said. “And he has such respect for their property, and for them.”

Randy Briggs is considered one of the top numismatists in the country, meaning he is an expert in the study of coins and paper money.

“He has one of the largest numismatic libraries in the world,” his wife said, pointing to a bookcase that was full. “And we have more out back. Oh yeah, we have even more at home too.”

For Randy Briggs, the excitement (or for younger folks, the coolness factor) of coin collection comes not in their value but in their story. Give him a few minutes to examine a coin and he can tell you not only what it is worth but why it was made the way it was, what was going on when it was made, and how they were used at the time.

“This is in pretty good shape, given that it was buried in the ocean for 150 years,” Randy Briggs said after showing a coin pulled from the SS Republic, a Civil War era sidewheel steamship that sank in 1865.

“That’s the year George Washington died,” he said. “It’s a nice example of a very early piece made in America.”

He starts telling the story of Joshua Norton, a San Francisco man who declared himself emperor in 1859 and began printing his own currency, which was actually honored in local establishments.

If Randy Briggs’ memory seems as fast as a computer, it’s’ because his love for historical stories is so strong, Lauren Briggs said.

“Other dealers are in the business of buying and selling,” she said. “Randy was a collector first and understands the collective point of view of numismatists. He has always been a student of history.”

Randy Briggs began collecting coins as a child and joined the San Bernardino County Coin Club as a teenager. He started working for Fred Coops. When he started college, he sought a business degree and he studied accounting, all with the plan to one day start his own business. Given his new accounting skills, he took over that roll for Coops.

Eventually, Randy Briggs realized he was doing what he loved.

“I thought, ‘Why would I want to do anything else,’” he said. “I have always loved collecting. And I have always liked collectors. I like being able to take care of them.”

In addition to selling collectibles, Coops holds a weekly auction. Items are placed in baggies and pinned to a bid board, and potential buyers bid silently as the week progresses, resulting in a sale every Thursday.

“Originally, it was just coins and stamps, but we have found people like to sell sports memorabilia, among other things,” Randy Briggs said. “We don’t really restrict what people put up there.”

Just like all of the items that Coops sells, Randy Briggs knows that the items that go up on the auction board have a story, which makes them important.

It’s just like his love of history. Randy Briggs believes those stories are ultimately what make us who we are.

“I am not so sure young people believe that anymore,” he said. “Whether they like it or not though, it does define them.”

And so, Randy Briggs is perfectly content being the keeper - and the purveyor - of these stories.

Recently, he met with a customer who brought in coins and paper money from Manilla. He picked each one up, studied it, seemingly kneading the metal as he held it softly between his fingers.

“These were done in wartime -- they were pretty common -- a lot of GIs brought them back,” he said. “They were made in a U.S mint that was there in Manilla for a short time.”

The customer nodded, taking it all in as he listened and learned about the history of his property.

It was another day, another coin, and another story to be found at Coops.​

Bullion, currency and stamps. OLDEST coin and stamp retailer in the country under the same ownership. More info here.

This is Why You Shouldn't Clean Valuable Coins
08/03/17 by Randy and Lauren Briggs
Coops Coins - Bullion, Currency & Stamps
01/26/16 by About Redlands Small Business Stories